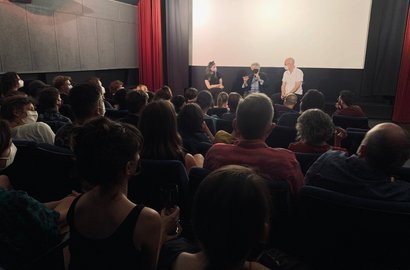 An international conference organized by the Department of Theater, Film, and Media Studies at Goethe University Frankfurt, in collaboration with Mal Seh’n Kino, the Städelschule and the Film Studies Program at the Johannes Gutenberg University Mainz.
Conference organizers: Josefine...

An international conference organized by the Department of Theater, Film, and Media Studies at Goethe University Frankfurt, in collaboration with Mal Seh’n Kino, the Städelschule and the Film Studies Program at the Johannes Gutenberg University Mainz.

Ever since its emergence as a low-cost, easy to access and share moving image technology in the 1970s, video has played a key role in political activism and community building. This international conference addressed the genealogies of contemporary video culture by taking a closer look at a crucial moment in the emergence of video activism: the queer activist video production in the US and across the world in the context of the AIDS crisis of the 1980s and 1990s. The focus of the event was the work of filmmaker Jean Carlomusto, an influential, if still underappreciated figure at the intersection of queer activism and interventionist video art, whose work offers a productive starting point for interdisciplinary discussions in contemporary film and media studies, art history and the study of social movements.

Jean Carlomusto is a filmmaker, activist, and media artist whose video work is a key reference in queer theoretical discourses yet relatively unknown to a broader public. Carlomusto started the Media Unit at Gay Men's Health Crisis in New York City in 1987, was a founding member of DIVA TV (a video affinity group of ACT UP) and a member of the Testing The Limits Video Collective. In addition to her collaborations in these contexts, her solo works include L Is For the Way You Look (1991), Shatzi Is Dying (2000), and most recently Esther Newton Made Me Gay (2022). Carlomusto’s work explores lesbian and queer histories, HIV/AIDS, and documentary practice in the form of experimental videos that attend to loss and collective trauma through humor.

The event combined screenings of Carlomusto’s work and other queer video artists from the 1980s to the present with a number of roundtables of artists, activists and scholars who spoke to queer archives and historiographies, video activism and the revisitation of historical material of the AIDS crisis in art, activist scenes and popular culture.

This event was made possible through the generous support of the Deutsche Forschungsgemeinschaft and the hessische Film- und Medienakademie.

See a final report on this conference below for download.
Please refer to the event page for the event programme or view the pdf version here.