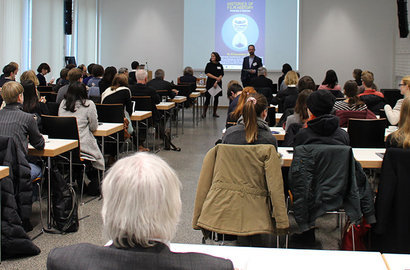 Organized by Malte Hagener and Yvonne Zimmermann, the InternationalConference “Histories of Film History: Materials and Methods” took place at theUniversity of Marburg from 13 to 15 December 2018. Over one hundred guests fromall over Germany and abroad, among them senior and younger scholars, PhD students,graduate and undergraduate students came to Marburg to listen to and interactwith the...

Organized by Malte Hagener and Yvonne Zimmermann, the International Conference “Histories of Film History: Materials and Methods” took place at the University of Marburg from 13 to 15 December 2018. Over one hundred guests from all over Germany and abroad, among them senior and younger scholars, PhD students, graduate and undergraduate students came to Marburg to listen to and interact with the presentations given by fifteen international experts in the field of film history and media archaeology.

The papers covered various aspects related to materials and methods of film history and historiography. The conference also included a panel discussion on the past, present and future of film history and film and media studies in general that provoked lively debates among the panellists and members of the audience. The contribution by the DFG was reflected in the presence of many international participants, both as presenters, chairs and as audience members. The hFMA-participation could be seen in the strong Hessian contingent with many chairs from Frankfurt and audience members from Gießen, Frankfurt and Offenbach. Finally, the graduate research training group (Graduiertenkolleg) “Configurations of Film” also supported the conference and most of the members were present for the conference.

The starting point for the conference was the observation that film and media – and consequently film and media studies – have been undergoing radical transformations in recent years. The digital turn, networked media and the ‘post-cinematographic era’ have been challenging film and cinema studies. These ongoing transformations do not only question what film is, but what film was. In other words, they question the history and historiography of film and cinema by forcing us to reconsider what our object of study is. Therefore, it is at this specific moment in time that we argue for a systematic, transnational and intercultural study of the mechanisms and methods of what has been termed ‘film history’. On the one hand, such an examination is necessary to provide a better understanding of the present state of film history. On the other hand, it is also prerequisite to uncover overlooked approaches, discourses and objects that may open up new avenues for further developing the field. We also took the emergence of digital research methods in film and media studies, and in film history in particular, as an incentive to both reconsider established approaches to film history and to explore the past, present and future of digital research methods in the field.

For the full report pls see pdf to download.